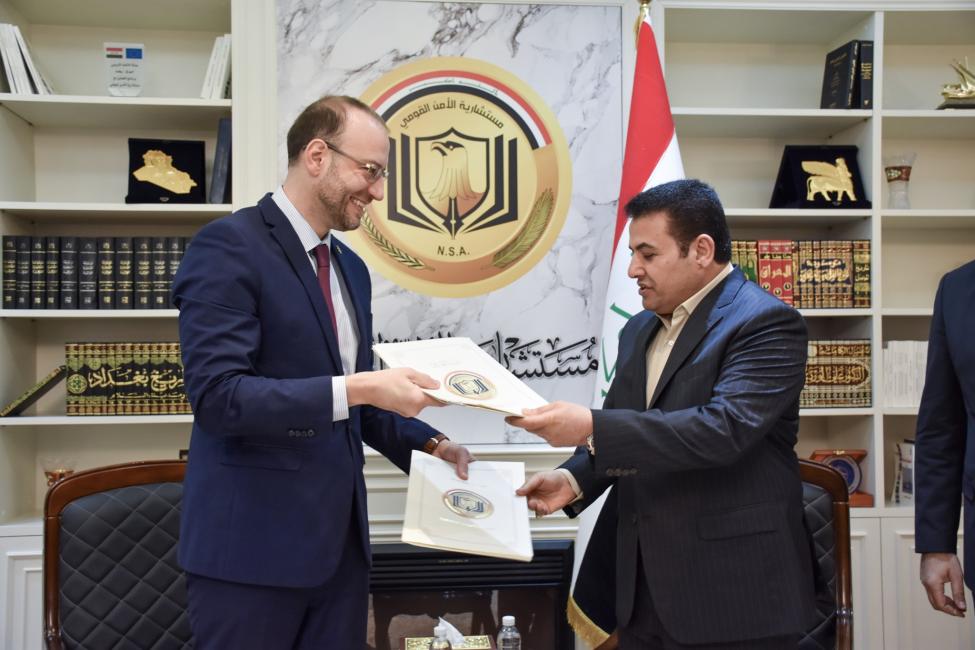 Baghdad – Four years after the military defeat of the Islamic State in Iraq and the Levant (ISIL), preventing violent extremism (PVE) remains a key priority in Iraq’s post-conflict recovery and stabilization.

On 16 December 2021, the International Organization for Migration (IOM) signed a Cooperation Agreement with the Office of the National Security Advisor (ONSA) on the implementation of Iraq’s National Strategy for Combating Violent Extremism Conducive to Terrorism. The Agreement Ceremony was held at ONSA premises in Baghdad and attended by IOM Iraq Chief of Mission, Mr. Giorgi Gigauri, and the National Security Advisor, His Excellency Mr. Qassim al-Araji.

The agreement will underpin IOM’s stepped-up support to Iraq’s national efforts to prevent violent extremism. It recognizes and provides a framework for multiple areas of collaboration between IOM and the Government of Iraq, including support for policy development; capacity building; development of area-based Plans of Action (PoAs) for the implementation of the National PVE Strategy; and expert exchange on prevention of violent extremism in the MENA region and beyond.

The signing came on the heels of a two-day PVE workshop in Baghdad held jointly by IOM Iraq, the Committee for Dialogue and Community Peace in the Office of the Prime Minister and the General Secretariat of the Council of Ministers, with support from the Government of the Kingdom of the Netherlands. In a demonstration of the government’s commitment to addressing extremist ideological movements and promoting peace in Iraq, the Prime Minister, His Excellency Mr. Mustafa Al-Kadhimi, opened the conference to an audience of government officials, tribal heads and prominent clerics, who went on to discuss topics including the role of gender in violent extremism.

“In Iraq, we have seen some of the worst-case scenarios that violent extremism can produce,” said Mr. Gigauri. “IOM’s mission to assist vulnerable migrants, internally displaced persons and conflict-affected populations means not only meeting humanitarian needs in crises and facilitating access to durable solutions; it also means working to address underlying causes of irregular migration. PVE thus represents a crucial element of IOM’s partnership with the Government of Iraq and the Office of the National Security Advisor.”

During the signing ceremony, both parties stressed their commitment to ensuring that human rights and the principle of do-no-harm underpin all future cooperation. His Excellency Mr. Qassim al-Araji also recognized the importance of collaboration between the international community and the Government of Iraq to address the transnational challenge of violent extremism.For more information, please contact IOM Iraq’s Public Information Unit, Email: iraqpublicinfo@iom.int