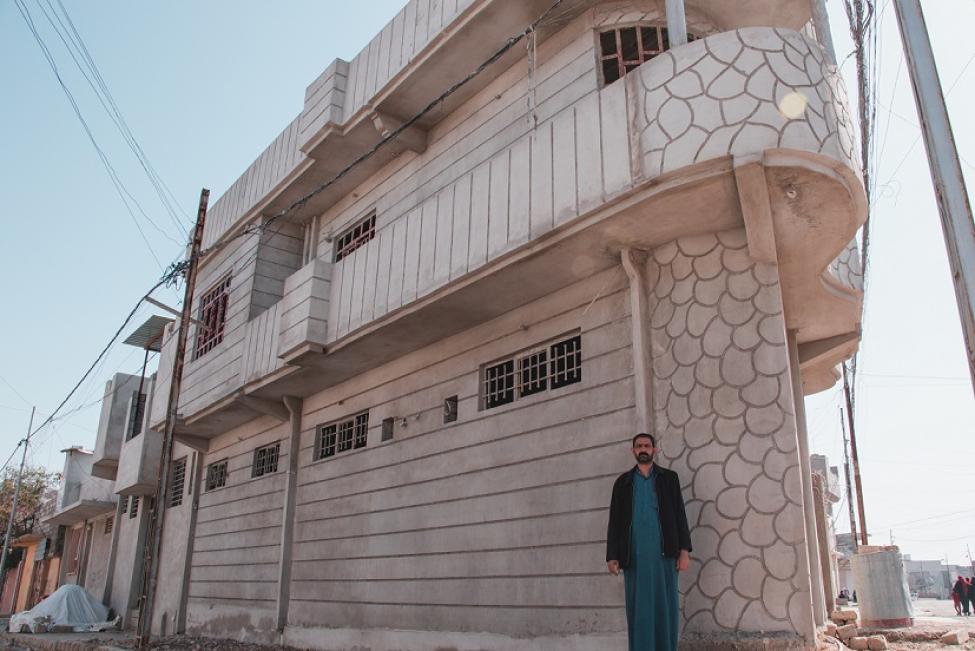 Erbil — As millions of Iraqi returnees continue to grapple with post-conflict realities in areas heavily affected by war, the International Organization for Migration (IOM) in Iraq has helped 18 families rebuild their destroyed homes in West Mosul with generous support from Qatar Charity.

The recently concluded “Reconstructing Destroyed Housing in Mosul” project contributed to the supporting durable solutions to displacement in Iraq and provided support to the most vulnerable families.

“We appreciate IOM Iraq and Qatar Charity’s initiative to rehabilitate 18 houses in Zanjili and [support] many projects in Mosul. Ninewa Governorate will do everything it can to facilitate rebuilding Mosul and bring life back,” said Ali Salih Khair, a representative for the Governor of Ninewa, during a ceremony on 26 April to commemorate the achievement.

“After ISIL took over Mosul, we were displaced to Salamiyah Camp until 2017. When we came back, our house was destroyed. We rented a house, but we kept hoping that one day we would go back home. IOM gave us hope and now my family is back living in our house,” said Faris, a project beneficiary from Mosul.

Housing destruction remains one of the biggest obstacles to return faced by internally displaced persons (IDPs). Lack of safe, dignified housing also poses challenges in terms of protection, putting especially women and girls at risk of gender-based abuse; it also causes additional hardship for households including elderly relatives and persons living with disabilities.

“Through this project, and with Qatar Charity’s support, IOM Iraq intervened in 24 sites to remove post-conflict debris and supported 18 families to build housing units. The project also included cash-for-work opportunities and skills-training, which allowed more community members to benefit and participate in the reconstruction efforts,” said IOM Iraq Chief of Mission Gerard Waite.

“We are delighted to rebuild destroyed homes in Mosul, in cooperation with IOM, which would contribute to providing a dignified life and creating a better environment for the beneficiaries,” said Mr. Ahmed Saad AlRumaihi, Director of Emergency and Relief at Qatar Charity. He added that “Qatar Charity is proud of its partnership with IOM in supporting and completing this important project”, and keen to work with UN agencies and international organizations, especially in crisis-stricken regions worldwide, to implement projects for the benefit of IDPs and refugees.

“After the liberation of Mosul, we came back to see nothing but debris. I was working and living in a rented house. Without IOM, I would have never thought of rehabilitating my house again,” said Sleman.

In cooperation with the Government of Iraq and local communities, IOM Iraq continues to implement comprehensive projects in areas of return to assist the sustainable reintegration of IDPs, including through rehabilitating infrastructure, livelihood support, improving access to basic social services, community policing forums, and social cohesion and peacebuilding initiatives.