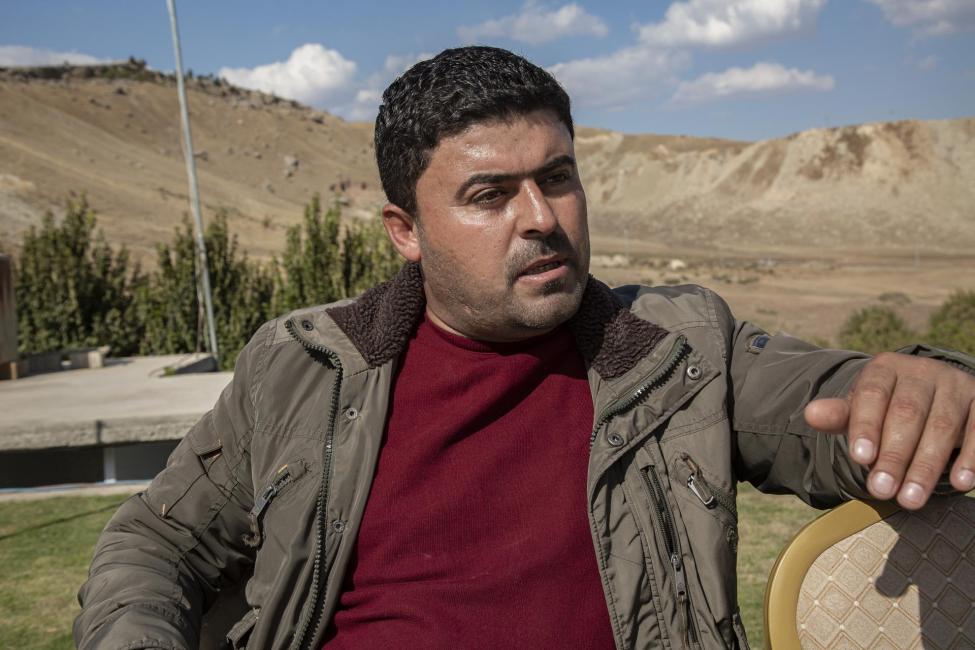 “Don't go, they will stab you and take your money.”

Mustafa Ali, 34 years old, recalled the words of a fellow migrant on the Macedonian border warning him and his friend about the dangers of trusting human traffickers in their attempt to reach Germany through irregular channels.

Mustafa divulged the story of how he survived a journey that has killed many.

He was 27 years old when he decided to leave his wife and son in his town of Rawanduz – located north of Erbil in the Kurdistan Region of Iraq – to emigrate to Germany irregularly, believing that he would find answers to his problems there. After the Islamic State of Iraq and the Levant (ISIL) occupied parts of Iraq, the country endured many years of violence, insecurity and other serious problems, not least of which was the deterioration of economic conditions.

“I left Erbil for Istanbul and went from there to Greece with my friend Honer,* who also wanted to look for a better future abroad. Despite our fear of crossing by sea, we managed to find a smuggler who brought us safely to Mytilene Island,” Mustafa remembered.

Mustafa described this experience as the most terrifying of his life because of the dangers he experienced. “When we were on Mytilene Island, we found a way to travel to Salonica. When we got there, we felt very strange and lonely. It was dark and we could not communicate with anyone. I don't know how we got lucky enough to reach a central bus stop to cross the Macedonian border.”

Mustafa remembered how everyone was trying to take advantage of them. He could not trust anyone because he had heard of many cases of the killing and stabbing of migrants.

“We arrived at the bus stop to go to Macedonia. A man told us he would take us to the Macedonian border for 50 euros. We accepted the offer and were ready to leave with him, but one of the migrants on the bus warned us not to; he told us he would stab us and take our money.

The situation worsened when we began to explore the place around us; it was full of scammers and human traffickers, most of them drug addicts. We knew that we were surrounded by criminals and that we might find ourselves stabbed on the side of the road. We were lucky to have survived. That night was very difficult and frightening.

En route across Macedonia, Serbia and Austria, we went through suffering that I will never forget. However, arriving in Germany did not end my hardship. I had to start from below zero, and it is no exaggeration to say that every single day, I was starting all over again from zero.

Germany was as I expected it to be: a beautiful country with nice people; but two months in, my life was still difficult, and I could not adapt to its culture. I was constantly thinking about my life in Rawanduz, how beautiful it was and how comfortable I was there.

I applied for asylum. While my case was being processed, I worked four hours per day and was paid very little; this was not an easy job, as I had to walk a lot to get to my workplace.

Of course, living in Germany has positive aspects to it. People have health insurance, and no one dies of poverty. There are always benefits, but you cannot prosper nor advance unless you make a very great effort to establish your life.

After a while, the authorities informed me that my asylum application had been rejected, and I was not able to get a job after that rejection. I knew it was time to go. I applied to return to Iraq, called my brother and shared my decision,” Mustafa said.

About a year and a half after arriving in Germany, Mustafa returned to Iraq.