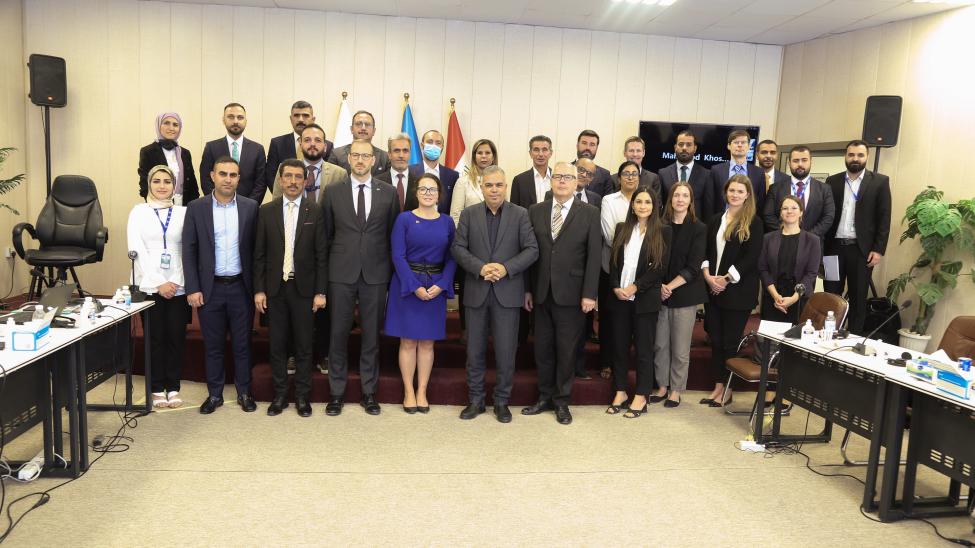 Baghdad — On 21 July, the UN Network for Migration, in coordination with the Ministry of Migration and Displaced (MoMD), briefed partners on Iraq’s participation at the International Migration Review Forum (IMRF) – held under the auspices of the UN General Assembly in New York from 17-21 May – and discussed future coordination on migration governance.

Opened by Deputy Minister for MoMD, Dr. Karim Al Nouri, the two-part event was convened by the Inter-Ministerial Technical Working Group on Migration (TWG), which provided a detailed overview of the key areas of progress made in migration governance since the passing of the Global Compact for Migration resolution in 2018, in addition to priorities and commitments for the future. In attendance were TWG members representing the Ministries of Migration and Displaced; Interior; Foreign Affairs; Justice; Labour and Social Affairs; and Planning, as well as representatives from the Kurdistan Regional Government.

In May, the chair of the TWG, Director General for Migration Affairs under MoMD, Mr. Ahmed Rahim, led the Iraqi delegation to the IMRF to participate in thematic roundtables, policy debates and a general debate that led to the adoption of the final progress declaration. Iraq also submitted a Voluntary National Review and committed to a set of forward-looking policy pledges.

“Following Iraq’s successful participation at the IMRF, this briefing helps us take stock at the national level of how far Iraq has come and what openings exist for continued progress and collaboration,” said Mr. Giorgi Gigauri, Chief of Mission for the International Organization for Migration (IOM) in Iraq and Coordinator of the Iraq UN Network on Migration. “This is central to better understanding the evolving role of the Network in supporting the Government of Iraq toward improved migration governance.”

With support from IOM and the UN Network on Migration, the TWG has been able to make progress in implementing the National Migration Management Strategy, enabling Iraq to become a leading member of the Champions Country Initiative.

“Looking ahead to the next IMRF in 2026,” continued Mr. Gigauri, “the UN Network on Migration provides an opportunity for joint coordination over the next four years on migration-related issues in Iraq that may not have received the attention and investment they deserve.”

Representatives of donor governments attended the second part of the event for a discussion on the role of the UN Network on Migration in Iraq and opportunities for collaboration on pilot initiatives and key thematic areas such as Migration, Environment and Climate Change (MECC). Governments represented included Australia, Canada, the EU (Delegation of the European Union to Iraq and DG INTPA), Denmark, Germany, Finland, the Netherlands, Switzerland and Sweden, alongside Network members including the UN Development Programme (UNDP), the International Labour Organization (ILO) and the UN Population Fund (UNFPA).

Updates were applauded by partners, and the TWG was congratulated on the progress undertaken in the ongoing implementation of the National Migration Management Strategy.

Dr. Karim Al Nouri closed the event by thanking all those who attended: “Almost four years have passed since Iraq signed the Global Compact for Migration in 2018. With the new progress declaration of the IMRF, we fully support a joint approach and partnership between the Iraq UN Network on Migration and the TWG, and welcome other stakeholders, in effectively addressing the challenges to migration governance in Iraq.”