Working to Set an Example on the Global Stage: Iraq, UN and International Community Discuss Way Forward on Return of Iraqis From Syria’s Al-Hol 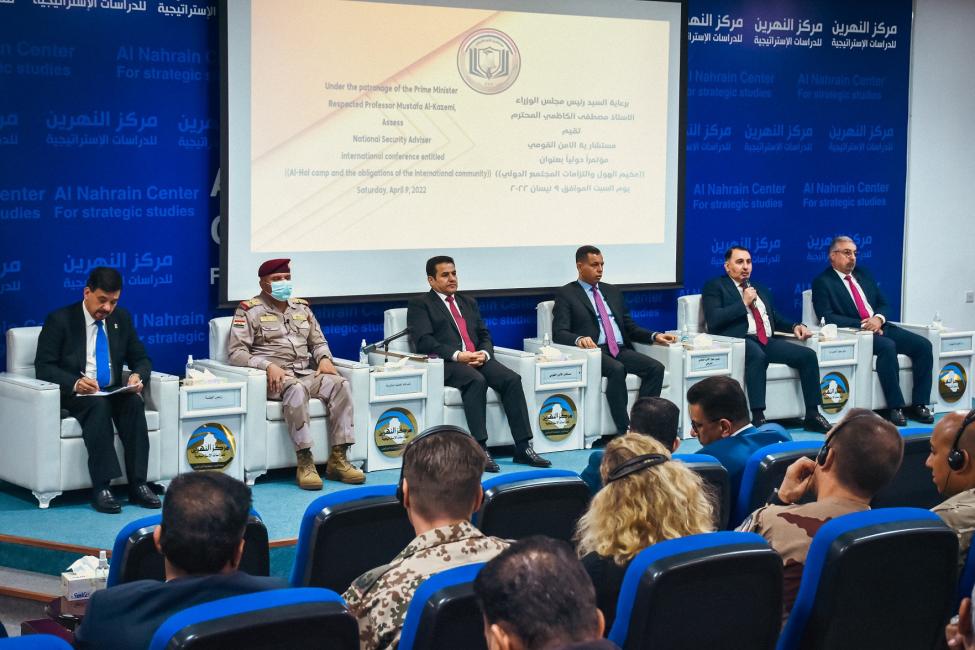 Baghdad — Concerted coordination between the Government of Iraq (GoI) and United Nations (UN) entities is crucial to bringing home Iraqi nationals who have become stranded in crowded camps or are detained in northeast Syria following the territorial collapse of the Islamic State of Iraq and the Levant (ISIL).

On 9 April, the International Organization for Migration (IOM), the International Centre for Counter Terrorism (ICCT) and the National Security Advisory of Iraq convened a high-level roundtable in Baghdad on Prosecution, Rehabilitation and Reintegration (PRR) in the context of the GoI-led repatriation of Iraqi nationals from northeastern Syria’s Al-Hol Camp. Today, almost 30,000 Iraqis — the vast majority of whom are women and children — remain stranded in northeast Syria with limited access to food, healthcare, education and other fundamental rights and services.

Organized under the patronage of H.E. Mr. Mustafa Al Kadhimi, Prime Minister of Iraq, H.E. Mr. Qasim Al-Araji, National Security Advisor of Iraq and H.E. Ms. Jeanine Hennis-Plasschaert, Special Representative of the Secretary-General for Iraq and Head of the United Nations Assistance Mission for Iraq (UNAMI), the event comes as part of efforts to interpret and implement the ‘Global Framework on all-of-UN Support to Member States on Individuals Returned from Syria and Iraq’ in the Iraqi context and featured a keynote address from H.E. Mr. Ambassador Matthew Tueller, U.S. Ambassador to Iraq.

The roundtable brought together representatives of the GoI, UN entities and the diplomatic corps to take stock of the ongoing GoI effort to repatriate its citizens from northeast Syria. With the GoI now seeking to accelerate this process, the roundtable also provided a timely opportunity to discuss the challenge of ensuring a comprehensive, human rights-based approach that promotes security and accountability for any offenses allegedly committed by returning adults, while also responding holistically to the protection and reintegration needs of children and adults.

“In terms of proactively taking steps to fulfil its obligations to repatriate its nationals, Iraq has set an example on the global stage. Some 450 families, or nearly 1,800 individuals, have been repatriated since May 2021,” noted H.E. Ms. Jeanine Hennis-Plasschaert. “The United Nations is particularly appreciative of Iraq’s intention to not only continue but also to accelerate repatriations. And yes, we are ready to continue providing the required post-return humanitarian, protection and reintegration assistance.”

IOM Iraq Chief of Mission, Mr. Giorgi Gigauri, stated, “To date, an incremental approach to the process of repatriation and onward return to areas of origin has allowed the GoI and UN to work together to identify ways to improve the process over time. Nonetheless, with the profiles of returnees likely to grow more complex, there are significant challenges to come. It is in this context and through these roundtables that IOM and UN partners are opening dialogue with the GoI on expanded support to address needs and gaps under the Global Framework.”

This event was the fourth and final roundtable in a series launched in February 2022. The first roundtable, which took place on 22 February, focused on screening, risk assessments and needs assessments; the second took place on 24 February and focused on age-appropriate approaches to rehabilitation; the third was held on 27-28 March, focusing on ways to promote community acceptance in areas of origin and facilitate the reintegration of adults and children; and the latest event, on 9 April, looked at the way forward in the application of good practices in Iraq.

The four roundtables were made possible by the generous support of the Government of the Kingdom of the Netherlands.