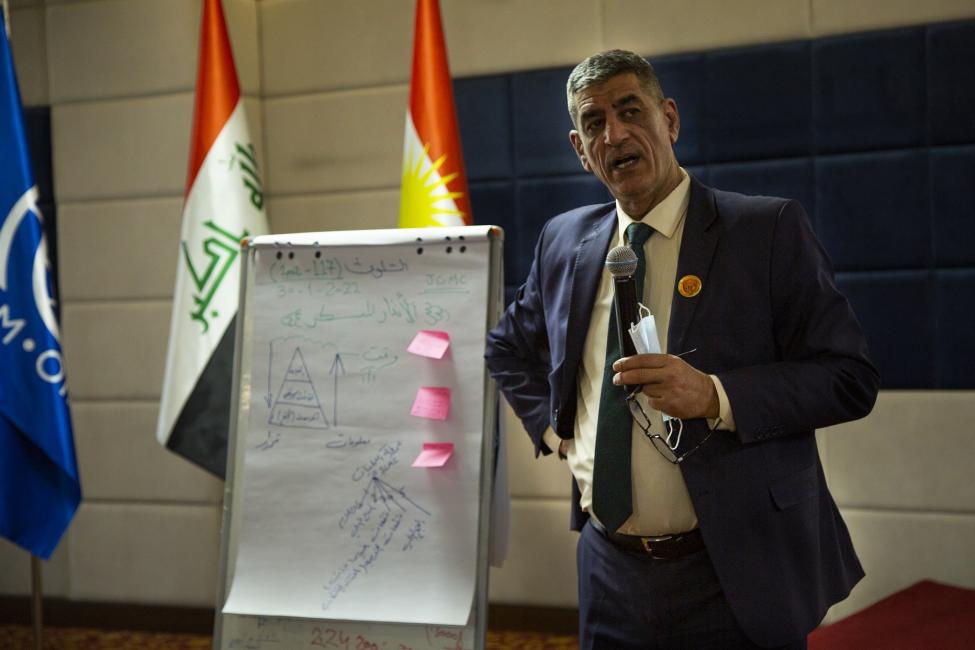 Erbil – Iraq is at risk of multiple natural and man-made hazards, like droughts, desertification, earthquakes and floods. Conflict-affected communities, including displaced populations, are particularly vulnerable to these disasters.

From January 29-30, the International Organization for Migration (IOM) hosted a workshop for senior government stakeholders from Baghdad and Erbil, to support their work developing standard operating procedures for crisis preparedness and response. The workshop focused on disaster risk reduction (DRR) and was organized with support from the European Union.

The workshop covered topics including risk mitigation, early warning systems and more. Senior participants from the Government of Iraq’s Joint Center for Monitoring and Coordination (JCMC) and the Kurdistan Regional Government’s Joint Crisis Coordination Centre (JCC) along with the Ministry of Migration and Displacement (MOMD) the National Operations Centre (NOC) and the Ministry of Defence along with Civil Defence and the Ministry of Oil were in attendance. All emphasized the importance of collaboration and coordination for more effective crisis responses.

“We have maintained a robust partnership with IOM during many previous issues and crises, but this particular topic is considered extremely important in the country’s current circumstances,” added Naseer Abdel Sattar, Director of JCMC in the Secretariat of the Federal Cabinet. “We will work on standard procedures during the coming period, which of course will be based on some guiding evidence set by the JCMC.”

“Clear and standardized operating procedures at the governorate level are the key to reducing the impact of hazardous events, which claim the lives of many and undermine national development and security,” said Shanaz Taha, Head of the JCC’s Strategy Division.  “At the end of the workshop, both Kurdistan Regional Government (KRG) and central government representatives gave their recommendations. We hope, with IOM’s help, to implement these recommendations soon and create a suitable solution to reduce the tragedies happening in KRG,”

IOM Iraq Chief of Mission Giorgi Gigauri concluded: “With clear links between disasters, climate change, conflicts and population movements, it is imperative to include DRR work in humanitarian work. This workshop was an occasion for IOM to reaffirm its commitment to support the government at all levels to build resilience.”

Working closely with governmental partners at national and sub-national levels, IOM’s DRR activities support initiatives to prevent and prepare for disasters and related population movements, provide disaster assistance and protection where displacement cannot be avoided and contribute to post-disaster recovery by promoting durable solutions to displacement and strengthening resilience to future and existing risk. Globally, IOM’s work on DRR contributes to States’ efforts to implement the Sendai Framework for Disaster Risk Reduction 2015-2030 which, along with the Paris Agreement, contains vital targets that contribute towards achieving the Sustainable Development Goals.